Why make reservations with an online booking site, when all you end up with is just a room? As a PRIVATEUPGRADES Member, our hand-curated 5 Star hotels will roll out the red carpet with perks and benefits included in the same regular price. Sign up today to:

Make travel extraordinary! For a limited time become a PRIVATEUPGRADES Member for free, and put yourself on the VIP list for exclusive extras, upgrades and opportunities from the most luxurious hotels worldwide!

Unique Luxury Hotel in Central London. This landmark building, whose ornate terracotta facade is marked by four British Queens guarding the entrance, has always been a proper home for glamour. The building was originally designed in 1898, and today you'll feel that history the second you step into Kimpton Fitzroy London's lobby and gaze around, from the marble as far as the eye can see to the original Zodiac mosaic at your feet. The original details mingle well with refurbished touches throughout the property, from the 334 guest rooms to the four dining and drinking establishments. The fresh, comfortable interior design (by Tara Bernerd & Partners and Russell Sage Studio) tips a hat to the building's past without neglecting its present.

Dining - Laid-Back Elegance. ''Palm Court'' - The Heart of Kimpton Fitzroy London - With a soaring glass ceiling that floods the room with light, comfortable clusters of seating, and lots of greenery, Palm Court is the laid-back luxurious center of the hotel. Whether it’s a cup of tea in the morning, a snack in the afternoon, or a glass of Champagne in the evening, this social hub has a constant buzz, filled with hotel guests and outside visitors alike. Afternoon Tea returns to Palm Court, bringing a fresh twist to this British classic. Seasonal sandwiches and freshly baked scones served with home-made jam are followed by artisan pastries created by the expert pastry team. Pretty as a picture and twice as nice to eat, it's perfectly paired with a glass of Taittinger Brut Réserve.

''Palm Court Afternoon Tea'' - Decadent Afternoon Tea - Enjoy afternoon tea in the stunning surroundings of Palm Court, sit under the soaring glass ceiling while relishing in this fresh twist of a British classic. The Palm Court afternoon tea features delights such as a Native Lobster, Avocado & Marie Rose Brioche Roll and a Sussex Charmer, Potato and Caramelised Onion Pasty, followed by classic White Chocolate and Pearl Scones served with Rhoda’s Cornish Clotted Cream, Homemade Strawberry Jam and Lemon Curd. Last but certainly not least, feast on pastries designed by the expert pastry team, indulge in desserts such as Macae & Raspberry Petit Gateau, Lemon & Strawberry Chocolate Choux, and so much more. Accompany your afternoon tea with a glass of Champagne or a selection from the Rare Tea Company. The choice is yours.

Neighborhood Restaurant - "Neptune'' - Visit the Modern British Neighborhood Restaurant in London Perched on Russell Square and Guilford Street's corner, Neptune is a chic and modern neighborhood restaurant. Start the meal with selections of thoughtfully sourced oysters and British charcuterie. Follow with fish direct from the boats in Cornwall and high-quality meats cooked over a wood-fire grill. The ever-evolving wine list focuses on a mix of low intervention and classic wines.

A Unique Cocktail Bar in London ''Fitz'' - Escape the Everyday. Any given night, you'll find movers and shakers gossiping over Negronis and letting their hair down into the wee hours at Fitz's, named after Charles Fitzroy Doll, the original architect of Kimpton Fitzroy London. The plush, glamorous cocktail den has an air that's electric with possibility, as if you never know who you'll see luxuriating on the velour sofa below the oversize disco ball.

''Burr & Co'' - Cafe Culture - Spend All Day at the London Coffee Shop. Tucked into a ground-floor space at Kimpton Fitzroy London, Burr & Co. puts a modern twist on London's Victorian-era coffeehouses' traditions. Open throughout the day. The casual cafe is the perfect spot to sip a solo cappuccino or share small plates and wine with friends. It's also ideal for those grab-and-go mornings when you really need to get on with it, and it's just a few yards from the Tube.

London Calling - Things to do - Local Flavor At These London Attractions. Overlooking one of London’s lovely garden squares in the heart of central London, Kimpton Fitzroy London is perfectly poised to take advantage of the city's many delights. Bloomsbury, London's bona fide cultural and literary capital, is home to the British Museum and various universities, and the neighborhoods of Marylebone, Mayfair, and Covent Garden are also nearby, making the promise of an afternoon souvenir-hunting at the Sunday Upmarket or watching Yotam Ottolenghi's team at work at Rovi both within reach. After a day spent exploring, return to Kimpton Fitzroy London, to unwind with a cup of tea in Palm Court, or to sip on a cocktail at Fitz's.

''Bloomsbury'' - London's intellectual hub is dotted with parks, museums, and universities. Two famous Charleses - Dickens and Darwin, once called Bloomsbury home, as did Virginia Woolf. ''Russell Square'' - Virginia Woolf gave this pretty swath of green a small role in one of her novels, and it's not hard to understand why. ''Central London'' - The beating heartbeat of the city, central London, has it all, including the touristy sights you need to see on your first trip and the dining you can't miss when you return. ''Universities'' - From University College London to the London School of Economics, the neighborhood is home to many academic institutions. ''Covent Garden'' - With high-end boutiques and buzzy restaurants and bars, Covent Garden is a West End neighborhood you'll never tire of.

Rooms and Suites at Kimpton Fitzroy 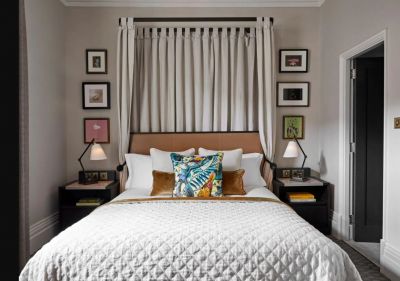 You deserve a room as unique as you are. The Standard Rooms vary from 16 sqm to 18sqm; features include a work table, accent lighting, 300-thread coun... 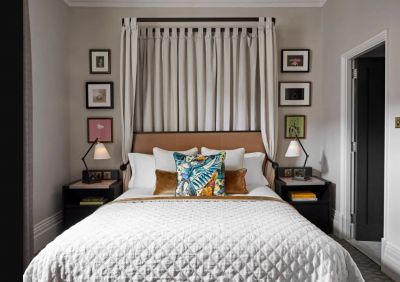 Forget ordinary, the Urban Doubles have a luxurious and welcoming feel. From their classic modern styling to sumptuous bedding that begs you to ‘sleep... 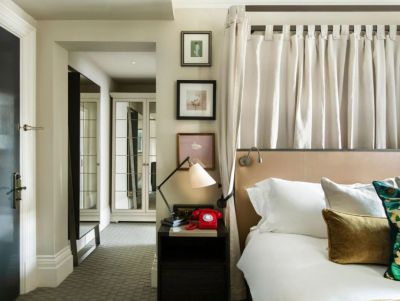 This moderately 25sqm sized room, which faces the interior courtyard. There's a king-size bed or Queen bed, or 2 queen bedded room, with a 1.8m custom... 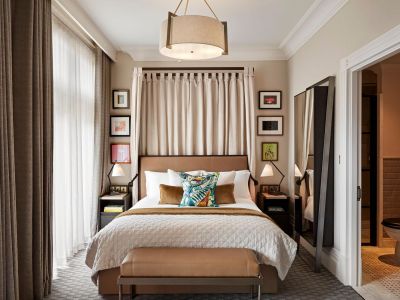 This 23 sqm Deluxe Double Park View rooms overlooks the gardens of Russell Square. In addition to all of the design details found in the Superior Room... 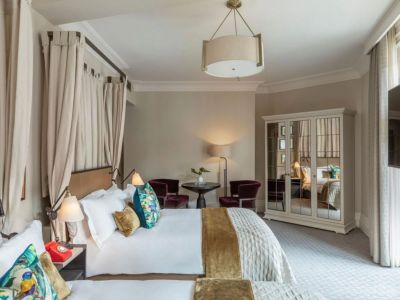 With two double beds, this 33sqm room can accommodate two adults each in a bed of their own or in a shared bed along with one or two children. You'll... 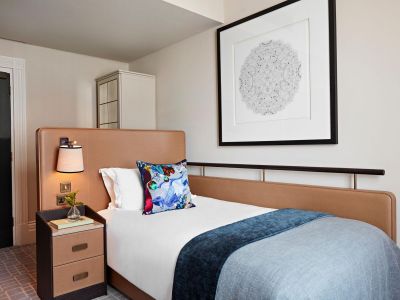 City Singles are the perfect choice for one person stays. Intimate and inviting with an oversized single bed, luxurious bedding and a waterfall shower... An unapologetically indulgent space in which to sleep, wine and dine. Lavishly styled with subtle nods to the hotel’s past, this large 68 sq m suite f... 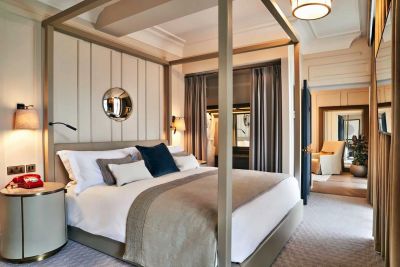 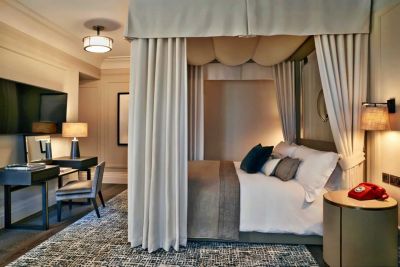 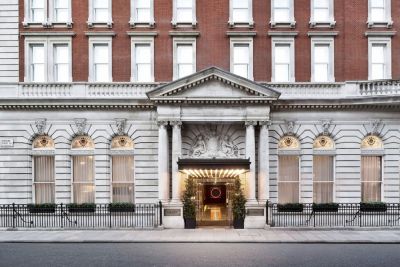 Boutique luxury and world-class service awaits you here at The London EDITION. Set within a historic building in the heart of the city, just steps fro...

EXPLORE THIS HOTEL
From 319 USD 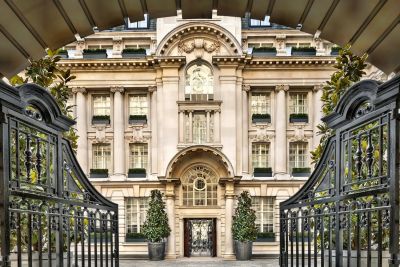 Rosewood London embraces guests within one of London’s most historic locales. The central location, moments from Covent Garden, near an eclectic arcad...

EXPLORE THIS HOTEL
From 425 USD 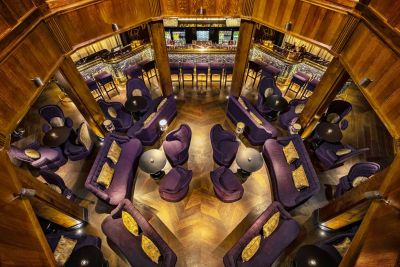 In an irony, Oscar Wilde would have appreciated a place of piety that has been transformed into a place of decadence. The hotel has been created from...